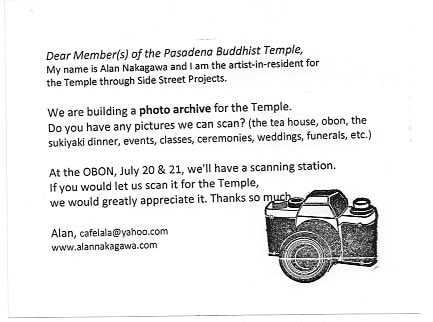 Interdisciplinary-artist Alan Nakagawa was invited to become the artist-in-resident of the Temple from March 2019 to March 2020 with support from Side Street Projects, a local arts organization who secured funding from the Pasadena Art Alliance and the California Arts Council.

Nakagawa was drawn to the signage in the back of the Temple, a hand painted wood sign that documents the donation of a tea house in 1964. The tea house was re-installed at the Huntington Library and Gardens in 2011.

Nakagawa started his research and soon found himself visiting the Temple on a regular basis, meeting the Sons of Gardeners, Jose Salcedo Sensei and other volunteers. Some of these interactions resulted in a podcast series of the same name, Invisible Tea House.

​Here's a link to an article about this project: link

As of January 2020, here are the components of the Alan's art intervention (thus far):

1. The Invisible Tea House, we have a hashtag #invisbleteahouse 2. Pasadena OBON July 20 & 21; our art interventions included: